Memorial Day is on the horizon. The holiday that falls on the last of Monday of May –this year that’s May 28 – has its origins in the years following the Civil War and was originally known as Decoration Day. It became an official federal holiday in 1971.

Memorial Day was established to honor the American men and women who made the ultimate sacrifice on behalf of their country. We do that by participating in solemn ceremonies at cemeteries and veterans’ memorials, and by applauding the surviving veterans who march in the thousands of parades that take place across the country.

Memorial Day also has a celebratory side, of course, since it serves as the unofficial beginning of summer. Hence, the holiday has become associated with family gatherings, barbecues, beach trips and – yes – gigantic, summer-focused sales. Last year, according to John S. Kiernan at WalletHub, 41.4 percent of Americans said they were “likely” to take advantage of Memorial Day sales, and they expected to reap discounts of 20-90 percent for their efforts.

Email marketers wanting to leverage Memorial Day would be wise to keep in mind the holiday’s patriotic significance, advises Samantha Gordon at Brafton

“Memorial Day is first and foremost a day meant to honor the soldiers who’ve given their lives for their country,” she writes. **“**For many, it’s also come to represent the beginning of summer, which can make things tricky for marketers looking to post holiday-related content. There is a certain finesse that comes with creating and sharing Memorial Day content. One step in the wrong direction can lead to an audience enraged that you’ve demeaned the true meaning of the holiday.”

In other words, your Memorial Day success depends, at least in part, on how respectfully you treat the holiday in your messages. Fortunately, you can promote your products or services (or even gigantic sales) in advance of Memorial Day without devaluing the holiday’s patriotic significance, while at the same time taking advantage of its position as the kickoff to summer.

Below are five examples that manage that balance very well and deserve to be emulated. 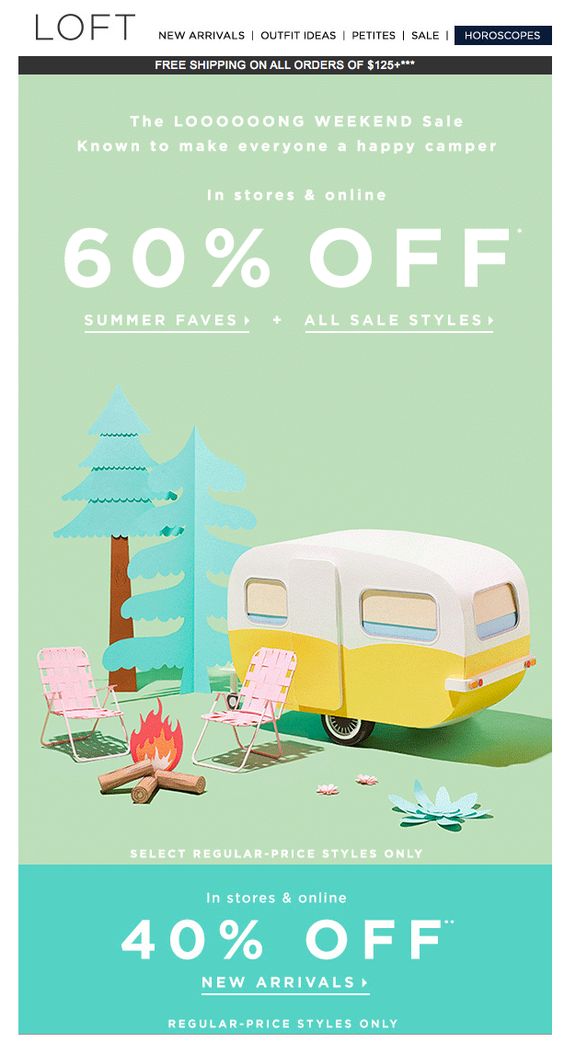 This message eschews patriotism entirely (there’s nary at star or a stripe to be seen). And while its focus is on Memorial Day fun, it goes about its business in a very understated way. Although the copy stresses that the company’s holiday sale will make “everyone a happy camper,” there’s nothing boisterous happening in the campsite, which appears serene (and remarkably unpopulated). The message’s overall mood is of relaxation and tranquility, and its lack of even a trace of the shade of red or blue traditionally associated with the holiday helps differentiate it from the countless messages with which it will compete that will undoubtedly feature that traditional color scheme. 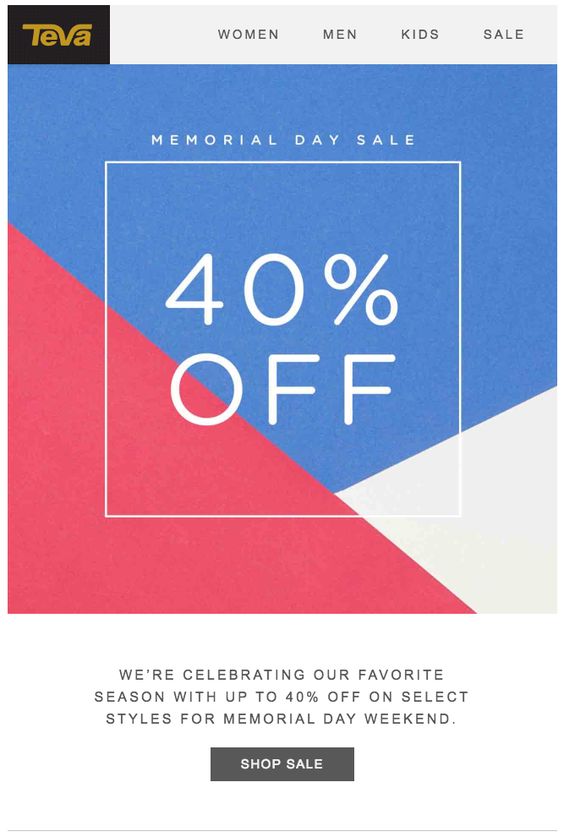 There is patriotic feel to this message, but it is extremely understated. While the design uses hues of red, white and blue, they are not the same shades that comprise the American flag. The message has a minimalist, appealing look that nicely frames its promotion of the coming holiday sale. The design is flag-like – but not nationalistic; the shapes come together to form what appears to be a sailboat pennant (a subtle nod to summer). It is clean, respectful, on-point, and effective. 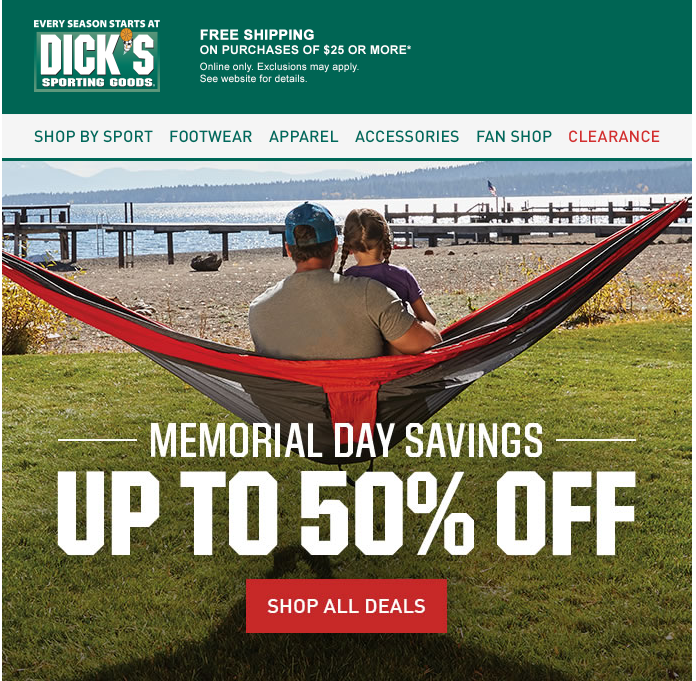 This message is an understated nod to Memorial Day’s popularity as an occasion for family gatherings. A father and daughter watch summer arrive on their favorite beach as they perch together in a hammock that dad no doubt recently purchased from Dick’s.  It’s a hammock that happens to be red and blue (and there is, perhaps, some white inside – it’s hard to tell). The copy couldn’t be clearer – “up to 50% off” – and the CTA is succinct and eminently clickable. 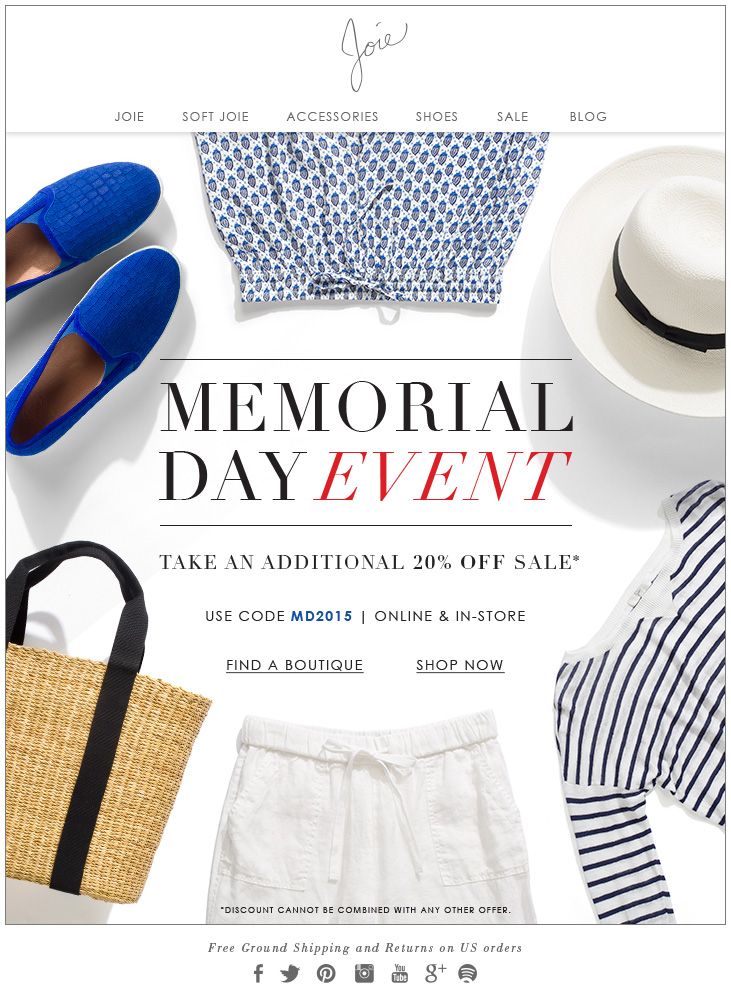 By displaying what appears to be an entire outfit – from head to toe, beach tote included – this message rather quietly communicates that the company has everything you need to be ready not just for the holiday, but for summer itself. And they are not having a Memorial Day Sale; rather, it’s a Memorial Day Event – a term more-frequently normally associated with car dealerships than with summer clothing. But adding that one word – and featuring it in red italics – manages to give the message additional impact, without coming close to disrespecting the holiday. 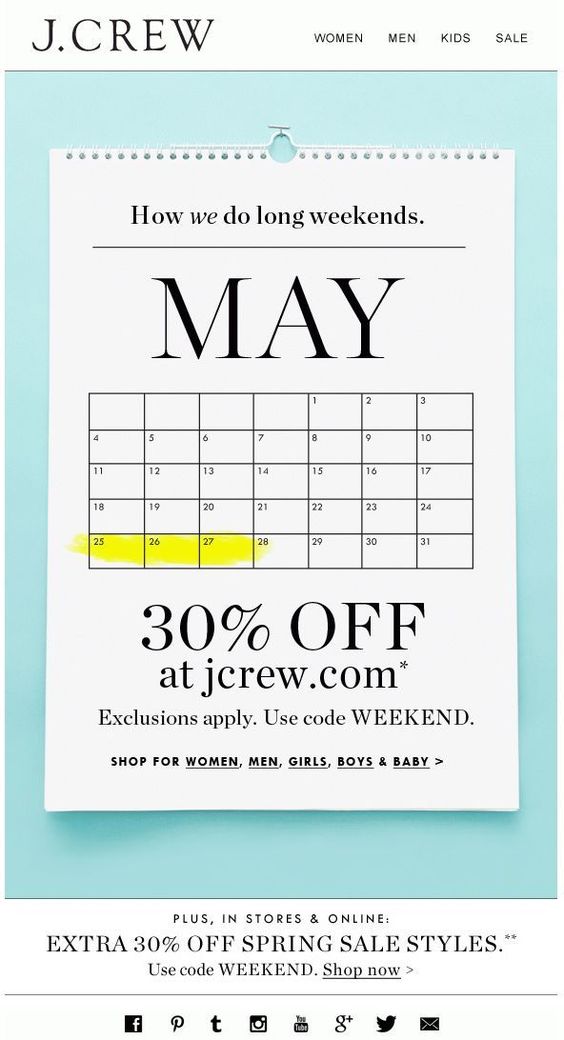 This is clearly a Memorial Day-related message although neither the words “memorial” nor “day” appear anywhere in the copy, and there is not a hint of patriotism in it. In fact, it doesn’t focus on the actual holiday at all. Instead it’s all about the “long weekend” that is vividly highlighted on the calendar. It is elegant, simple and totally respectful of the holiday it barely acknowledges. And it works.