Learn more about the evolution of our brand from Movable Ink’s Executive Creative Director, Lindie Gerber. Read the Blog

The Oscars present a huge opportunity for email marketers across all industries to reach out to their subscribers: those in media, entertainment, retail and more delivered campaigns this past weekend. But how do consumers actually interact with email during a big entertainment event?

In our Super Bowl Email Report, we learned that people can be engaged with both an event and their email. Who knew?

Oscars weekend followed a similar trend, which is great news for email marketers everywhere. We took a look at email open rates, read lengths and device preferences from Thursday, 2/23 to Monday, 2/27 to discover the biggest trends of the 2017 Oscars.

Looking at overall device open rates, smartphone came in at the top. This is pretty typical, especially for any period of time that includes a weekend (when people are out and about and glued to their phones).

As expected, smartphone opens were highest on Saturday (59%) and Oscar Sunday (58%). Opens on tablets also peaked during this time, then dropped by 4% on the Monday after the Oscars.

High smartphone and tablet opens during the Oscars indicates that people are still paying attention to their inbox during the Oscars. So even if they’re traveling, at a friend’s Oscar party or simply away from their desktop, they’re definitely checking their email.

In general, smartphone opens peak in the morning and at night, with desktop picking up where mobile drops off. This usually means that people check their email via smartphone first thing in the morning and before they go to sleep. During the day when they’re at work, they open email on desktop.

This is very much the case during Oscars weekend. We also see tablet use follow the same pattern as smartphones.

Read lengths were high during the Oscars

This points to the importance holding your subscriber’s attention in your emails, especially emails you send during the weekend or during big events like the Oscars. It’s possible that those 27% of skimmers found their emails irrelevant or boring. 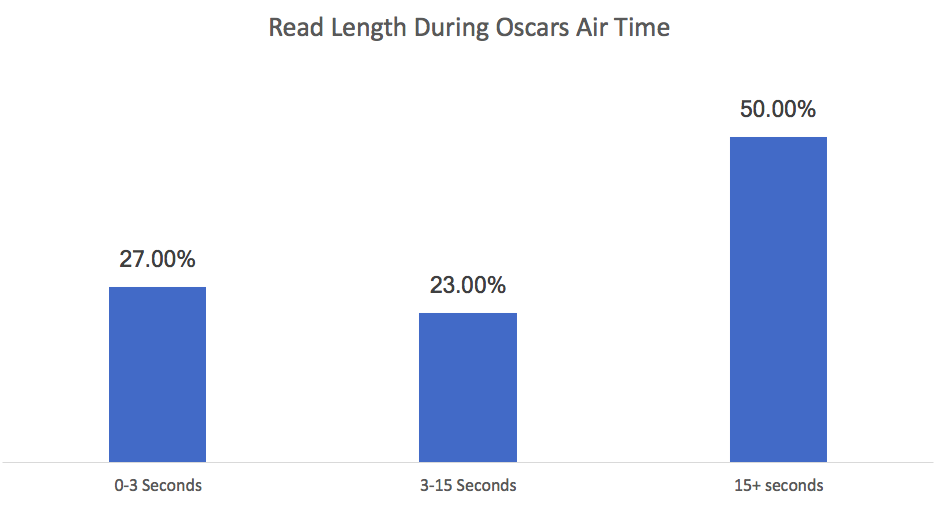 The 2017 Oscars weekend saw results similar to the Super Bowl. It’s clear that people are overwhelmingly opening emails on their mobile devices during big events like the Oscars and if an email is relevant to them, they’ll continue reading and engaging.

Here are a few takeaways:

– Optimize and test your email design for multiple devices – and don’t forget tablets! Many people turn to their tablets to open email during the weekend.
– Consider running a time-targeted email campaign with multiple send days and times. This allows you to better leverage events like the Oscars that land on a weekend.
– Make your subject line relevant to the content within your email. You have mere seconds to grab your subscriber’s attention. If your subject line isn’t relevant and your email isn’t engaging, they’ll feel duped and send your message straight to spam.