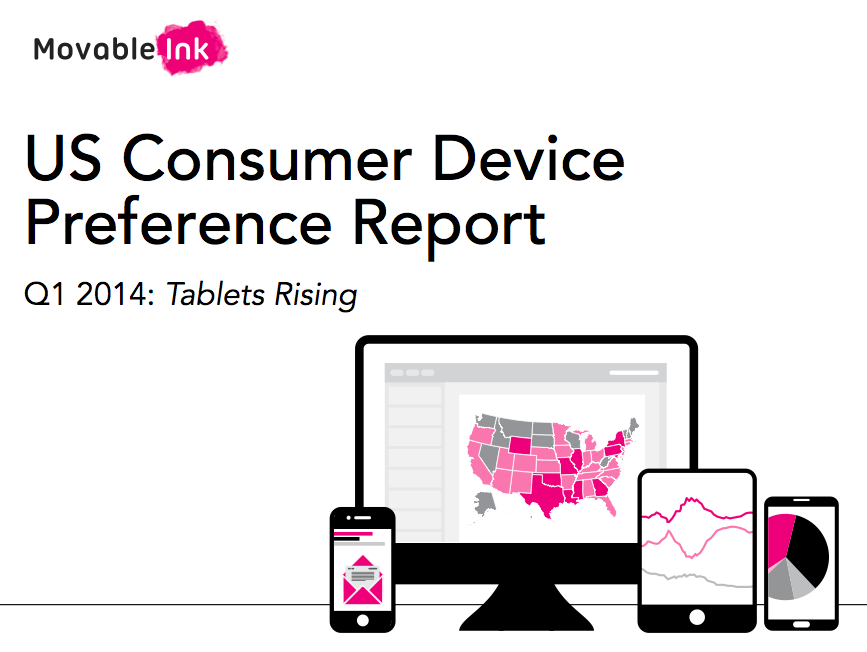 More and more Americans are turning to tablets when it comes to interacting with consumer brands, according to a new research report from Movable Ink. The data reveals that 18.5% of marketing emails were opened on a tablet in the first quarter, up from 16.5% from the previous quarter, and from 13.8% when Movable Ink first started reporting on device usage statistics in Q2 2013.

The Movable Ink “US Consumer Device Preference Report: Q1 2014)” also shows that there are only 13 states remaining where desktop email opens exceed smartphone opens. By comparison, the country was evenly split just nine months ago, when Movable Ink issued its Q2 2013 report, underscoring how rapidly the mobile takeover is occurring.

“Mobile adoption continues to grow, and tablets are playing a bigger role in the mix,” said Vivek Sharma, Co-Founder and Chief Executive Officer of Movable Ink. “Marketers should be laser focused on what we call “next tap optimization,” which is all about making it easy for consumers to engage with brands and shop when using their smartphones and tablets.”

The quarterly report provides deep insight into the popularity of various devices, examines differences in consumer engagement based on the devices they use, and shows how device preferences vary across the nation. Unlike other studies, this data set exclusively includes results from large, enterprise B2C marketers.

About the Movable Ink “US Consumer Device Preference Report: Q1 2014”

Charts are based on data collected through Movable Ink’s agileEMAIL platform between January 1 – March 31, 2014. They reflect aggregate statistics across Movable Ink’s customer base, which includes more than 150 enterprise B2C marketers from the retail, travel, financial, media, and telecommunication industries. Because determining email opens requires images to load, the percentages for some devices might be over or underrepresented.