Movable Ink's 2022 Audience of One consumer survey is here!

Learn exactly what customers expect from personalization and marketing communications

This article was originally posted By John Landsman, Director of Strategy and Analytic_s for eDataSource._

It’s all over now. Holiday burgers, dogs and brats eaten, along with the fresh corn, sliced tomatoes and watermelon. And maybe even our first s’mores of the season. Along much of the eastern seaboard, it was very rainy, with a lot of Holiday fun cancelled or moved indoors. But summer is finally here, even though it’s not official for another three weeks.

Our last Nugget previewed Memorial Day. As promised we kept looking for Memorial Day emails, discovering that the real email push for this Holiday occurred since our first report. Much of that activity occurred on Memorial Day itself.

The left hand table below [top] shows activity we’d detected and shared in our initial report. The right hand table [bottom] shows all related activity in the nine days since. 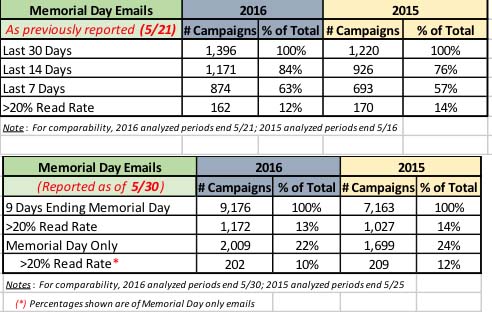 Enjoy your summer. We have only five more weeks until July 4th!