Movable Ink's 2022 Audience of One consumer survey is here!

Learn exactly what customers expect from personalization and marketing communications

More and more consumers are discovering their inbox is where the action is these days. Without even opening an email, they’re find themselves getting stuff done in their inbox—RSVP-ing to invitations, sharing ratings and reviews, tracking packages, adding songs to playlists, and reviewing flight information and restaurant reservations.

The secret behind this unprecedented usefulness in unopened messages, as well as the increased interactivity within them, is schema.org markup—a type of microdata developed by a collaboration between the major players in search—Google, Yahoo!, Bing and the Russian company Yandex.

The collaboration was formed to find ways to make search results more relevant to users by making it easier for search engines to parse and interpret information. Schema.org markup can, for instance, make it clear to search engines that a web page reference to “Avatar” is to the movie of that name, not the synonym for “profile picture”—thus ensuring more accurate and useful search results.

But it turns out that schema.org markup is useful for more than just SEO.

Savvy email markers are increasingly employing schema.org markup to make their emails grab greater attention, allow recipients to take action from within the inbox, and generally make messages more interactive and useful. Emails with relevant schema.org markup will even turn up in users’ search results when they search for topics like tickets, flights and events.

“Email is an important part of how we get things done—from planning an event with friends to organizing a trip to Paris,” according to Google.  “Such information is contained inside emails—like the details of a dinner party or travel itinerary—and so many emails require action—like RSVP, or flight check-in. By adding schema.org markup to the emails you send your users, you can make that information available across their Google experience, and make it easy for users to take quick action.”

Google’s Inbox, Gmail, Google Calendar, Google Search, and Google Now already use schema.org markup, and the company is working with the collaborative to create an open standard so the markup can be used by any email product.

While the value of the engagement and interactivity schema.org markup provides is apparent, Hines recommends that before incorporating it in emails, marketers ask themselves a few questions to determine if it is right for them, including if it will actually increase desired results and how much time will it take to revise emails if and when the standardization Google predicts is finalized.

Nevertheless, because schema.org markup is so effective in making emails grab attention and expedite action, there’s little doubt its use will continue to increase. 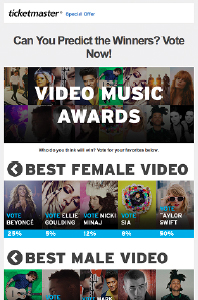 (Above) Schema.org markup can add functionality to emails that includes the ability to add media to a queue, check into flights, and perform many other types of actions. (Below) Google search results include emails that contain relevant schema.org markup. Source: https://developers.google.com/gmail/markup/