Have you registered for (Re)Think?

After all, that’s the most important thing, whether you’re talking websites or emails or collateral. Responsive emails can get very technical very fast. How wide should an email be? How big should your text be?

The thing that’s talked about less often, though, is user behavior. What are your customers likely doing while they’re checking their inboxes? What’s more effective when it comes to driving engagement on mobile devices?

Well, Pew just released a comprehensive report, US Smartphone Use in 2015, that sheds light on a lot of these questions:

1. We’re Officially in a Mobile-First World.

Almost two-thirds of Americans (64%) own smartphones. Among that number, 10% have no other easy way to get online. So smartphones aren’t just supplementing laptops and desktops, they’re actually replacing them.

A growing number of Americans primarily think of tiny screens and using their thumbs when they think of “going online.”

2. Mobile Searches are Getting More Personal.

In the Northeast, 41% of smartphone owners have used their phones for public transit information.

4. Phones are Used Just About Everywhere.

The most common place that users are on their phones is at home, where 99% of participants said they accessed their mobile device. But cars and public transit (82%), as well as work (69%), were popular locations as well.

Around half have used their phones to learn about a news development, resolve an argument, or find a good way to get somewhere.

What It All Means for Email Marketing

Marketers can’t turn a blind eye to these developments. Across every demographic, email was still one of the top activities on smartphones – in fact, Pew found that 88% of the survey respondents had used email at some point during the study period.

Email is more widely-used than social networking, videos, or using maps and navigation. It fell behind texting, voice and video calls, and general Internet use.

What Pew’s research really shows is the sheer breadth of activities where smartphones have come to play a part.

Email marketers need to think about how the real-time emails can sync up with customers who could be checking their inboxes while doing nearly anything – whether checking their balance, trying to find a restaurant, or just having an argument about whether Taylor Swift is the best or worst thing to ever happen to music.

The marketing that succeeds in the future is the marketing that can actually respond to the context of a customer, in real-time. Whether that means a geo-targeted email or a weather-sensitive sales offer, there are ways to make your emails more relevant and, consequently, more useful than ever before. 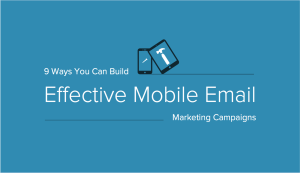