Most marketers know that the saying “context is everything” applies to the planning and execution of email campaigns in a major way. If most of your customers check their emails at work on their desktops, is Sunday afternoon really the best time to expect them to open your message—or will it just be buried by Monday morning?

Understanding how customers access and interact with their emails—and essentially meeting them where they are—can be the key to a well-received communication. For example, if you’re targeting people in retail, you should know they prefer to read emails and make purchases on their mobile devices, but if you’re reaching out to the nonprofit world, desktop users dominate (and mobile optimization becomes less of a priority).

The hitch? Thanks to continuous innovations in technology, customers’ interactions with their email on different devices change all the time. But don’t fret– we analyzed 1.32 billion emails to get insights into the latest trends, which you can find in our US Consumer Device Preference Report for Q3 2015.

The data reveals lots of useful information, but one trend stood out in particular: while email 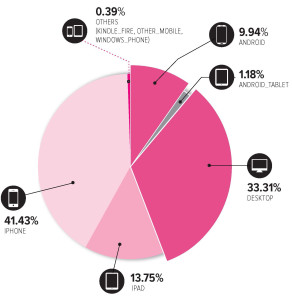 One thing we can learn from this is to watch the device market itself. Tablet sales took a nosedive with a near 15% drop from last year, and sluggish shipments are predicted to continue into 2016. As smartphones (and Apple devices in particular) expand their functionalities and features, perhaps users no longer see the need to switch between devices as frequently, or to purchase additional devices. In fact, data shows that smartphones, not tablets, are the device of choice for holiday shopping this year.

Sales among device manufacturers also apply to brands. iOS rules the roost, with iPhones accounting for 41.43% of opens and iPads at 13.75% of opens. No surprise, given that Apple has traditionally been the top smartphone manufacturer. But this may change, as Samsung smartphone shipments have started taking a bite out of Apple.

But the devil is in the details—if time spent on email is more important to your campaign goals, then count on the little guys: 1.18% of Android tablet users spend the most time on average reading emails, outside of Kindle Fire users.

But that’s just the tip of the dev-iceberg (we couldn’t resist). Download the full report here.