Catch all the sessions on demand - Watch Now

Last week, we covered nine of our favorite emails from #Snowmageddon (or, as we started calling it in New York, #FakeStorm2015). We were really impressed by how brands created emails that specifically targeted a one-day event.

We started wondering how companies were using emails for other events, too. How does a cupcake company jump onto the #Superbowl bandwagon with a special deal? How does a housing and rental website connect house-hunting with the Super Bowl?

Well, we pulled together a bunch of #Superbowl emails to find out. Here are five brands that used the context of Super Bowl XLIX to offer subscribers something relevant and timely to add to football’s ultimate Sunday:

ClassPass, a tech startup based in New York City, uses email marketing to send content around healthy eating and exercise habits to the company’s subscriber base. By positioning this email around “8 Healthy Hacks on Super Bowl Snacks,” ClassPass ensured that there would be more subscriber engagement around a relevant and timely topic.

This is a great example of how brands can build contextual email content around an upcoming event, even if there are no products to sell, offering subscribers something useful that builds brand loyalty. 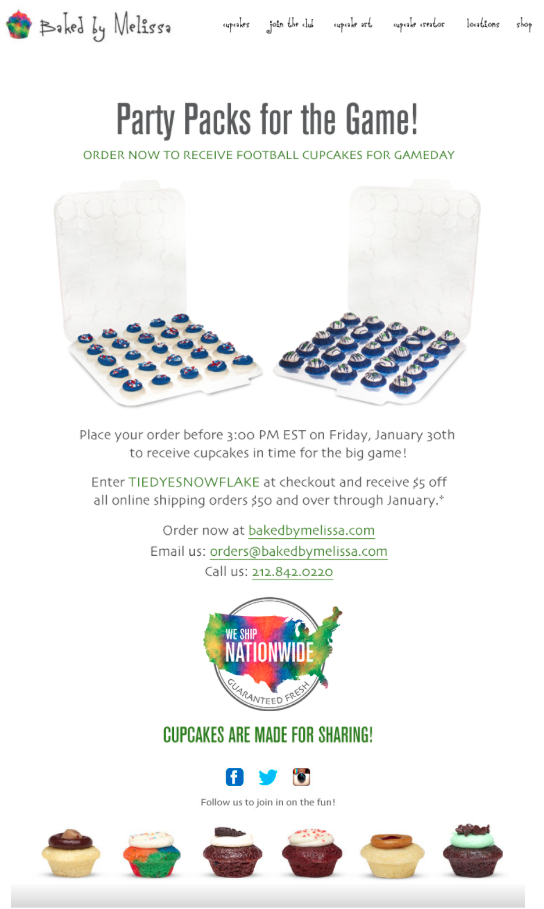 Baked by Melissa sent an email that had a picture of Patriots and Seahawks-specific cupcakes on the Thursday before the Super Bowl.

By offering delivery by the time of the game, the company ensured that anyone looking for last-minute party snacks would be able to quickly enter the deal and secure some cupcakes for the Super Bowl.

Groupon used the Super Bowl to promote football-specific products, heavily discounting items that might be in high demand for the game… like the always-necessary NFL Infrared Helmet Heater.

West Elm doesn’t sell party snacks or football merchandise – the company sells modern furniture and glassware. However, to make emails that were contextually relevant to subscribers, West Elm decided to create a “Game On!” email that promoted a discount on anything that could be used at the party itself: glassware, serveware, trays, barware, tables, and more.

By sending out an email targeted toward the hosts of the parties as they tried to organize for the Superbowl, West Elm made the email and deals relevant and engaging. 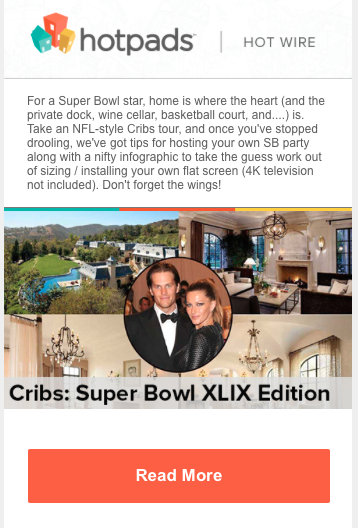 When most people are talking about the Super Bowl, real estate and rentals aren’t exactly topics that come up that often. But Hotpads connected the two through contextual content.

In the email, “Cribs: Super Bowl XLIX Edition”, Hotpads included an article that showcased some of the mansions owned by Patriots and Seahawks players and an article about how to host a Super Bowl party.

With an audience that big, marketers can be almost positive that other emails and digital content is going to fall to the wayside in favor of all things football. You don’t have to be in the business of party planning to create contextually relevant emails about events like the Super Bowl. As some of these brands show, all it takes is a little creative content to make the connection.

This is what contextual email marketing is all about – the brands that will continue to get email engagement from subscribers are the ones that are always thinking of ways to send campaigns that don’t interrupt a customer’s experience, but add to it. 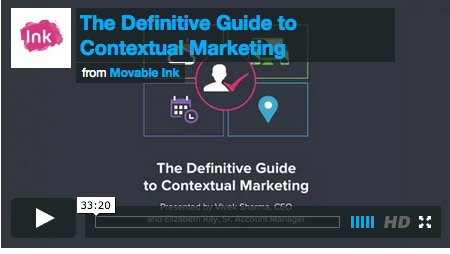