When it comes to offering liberating opportunities for creative email marketing, nothing compares to April Fool’s Day. There are no constraints regarding color schemes (that’s right, St. Patrick’s Day, we’re looking at you!), no themes to haunt you the way, say, Halloween does, and there is absolutely no place for sentimentality (sorry, Mother’s Day!).

The Prime Directive for April’s Fools Day is just to have fun (while not offending anyone or damaging your brand, of course). With that in mind, here are seven ideas for taking advantage of this once-a-year opportunity.

According to recent reports, there are now more openings for many jobs than there are qualified job-seekers. But despite that, you are sure to attract eyeballs if you announce a unique position – especially if it’s in glamor industry like show biz. That’s what the DVD-rental company Redbox did to get some April Fool’s Day traction, with its announcement it was hiring “Kiosk Ambassadors” to dispense and retrieve DVDs from within their familiar, well, red boxes. 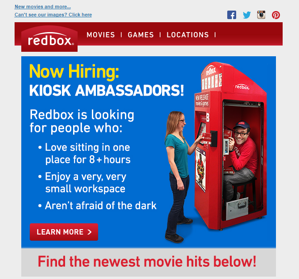 What’s the strangest position you can think of that could be even tangentially associated with your brand? Write it up!

2. Feel free to be punny

Some people can’t get enough of ‘em, while others can’t stand ‘em. But a good pun might just get a laugh – and a bad one? Well, a groan is still a reaction, right? Birchbox, a subscription-based sample company, does some “tears/tiers” wordplay in this April Fool’s Day message to promote its offer of a “free joke.” 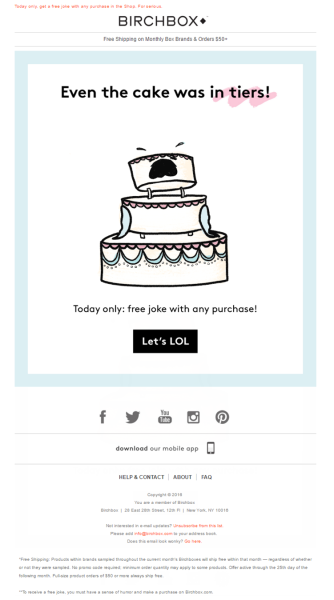 If you are at all claustrophobic, you might be particularly good at coming up with puns. Why? Because you are used to thinking out of the box. (Sorry, and have fun!)

3. Be a serious contrarian

Maybe you simply aren’t feeling the April Fool’s Day magic. Or perhaps your prospects have super-serious customer personas. Well, there’s no law that you must try for hilarity on April Fool’s Day. So maybe do what J. Crew Factory did with this message – highlight that you’re eschewing “funny business” and just offering some great bargains. 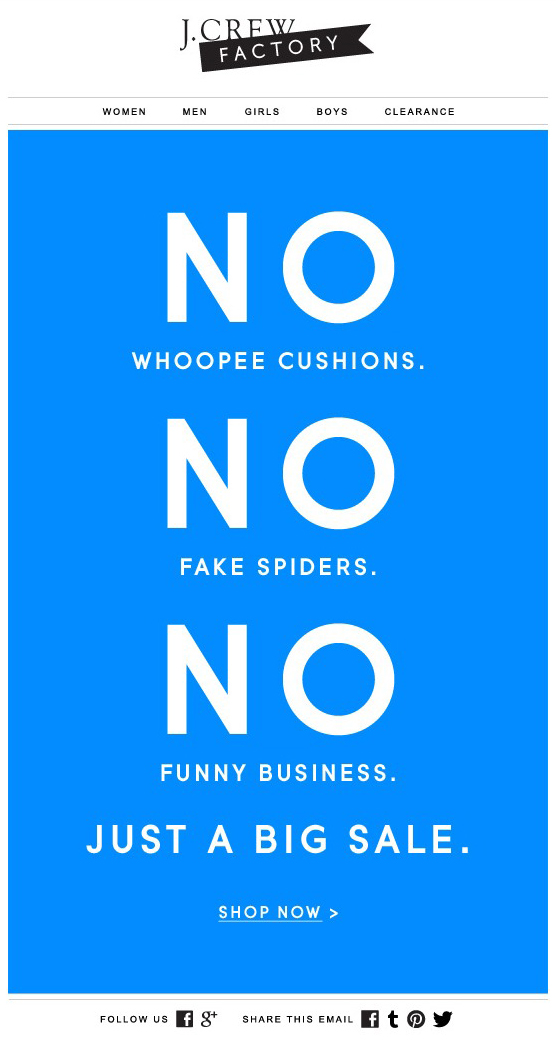 Can you successfully leverage April Fool’s Day by playing the curmudgeon? Give it a shot!

The creative folks behind this Domino’s message were as insightful as they were inspired. They could have stopped with the creation of an exciting new food – edible pizza boxes. But they also realized that their packaging breakthrough was worthy of its own brand – hence, “snackaging.” 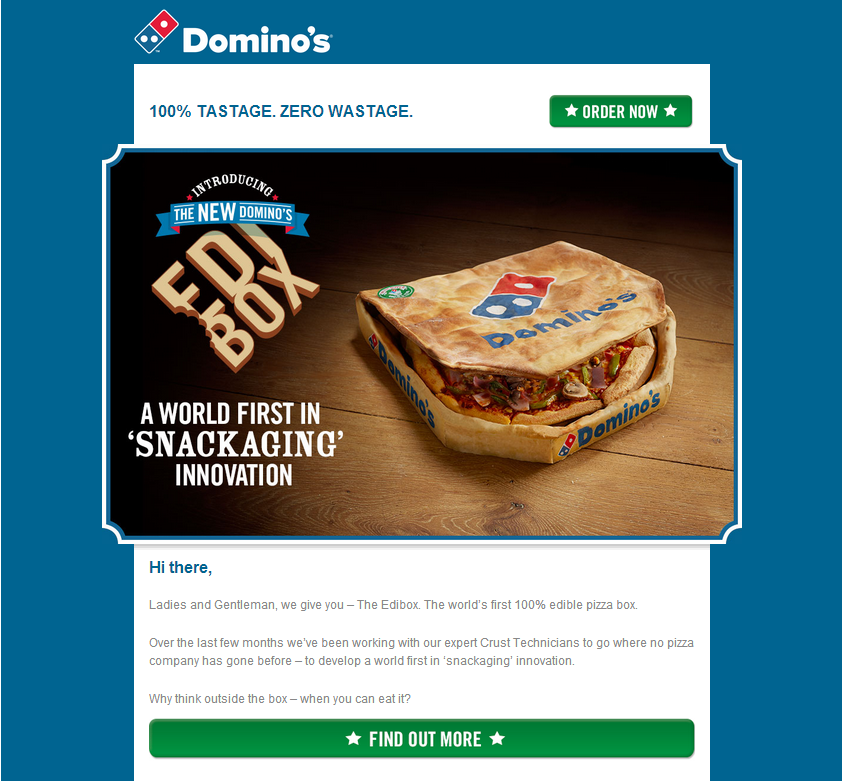 What’s in your product portfolio that you can turn into something eatable or drinkable?

5. Have fun with size

“Claiming that its burgers are so huge that they leave no room in eaters’ tummies for a whole order of fries — the fast feeder in France is now offering the frites one-by-one, each individually wrapped like a piece of candy,” Advertising Age reported about Burger King in 2016. And, yes, this was an April Fool’s Day gag.

What can you increase or decrease that will help you cut through the April Fool’s Day noise?

6. Make it about animals

Yes, this is the second appearance of Redbox in this round-up, but the company earned it. This pun-filled (see item #2 above) message has definite stopping power – especially for pet owners who probably had to think twice (or more) about whether or not this announcement was real. (And even if our favorite feline isn’t a movie lover, we’d watch a version of Jaws that starred a cat instead of a shark – just to see a cat swim!)

Try to figure out what animals you would market to if you could. Then do it!

Most Friday nights on HBO, you can watch comedian Bill Maher run down his list of “new rules.” It’s a reliable peg on which he can hang a half-dozen or so political jokes. This message from Pizza Express uses the same basic framework – they simply announce that in response to “customer demand” they have banned cutlery from their restaurants. One must click on a video link to find out more. We’re certainly intrigued enough to do that!

What could you require of your customers that they would find surprising, obnoxious or just strange? Once you figure that out, you’re on your way!

April 1st is one day when almost anything goes, so you might as well just go there! Pop-Tarts didn’t hold back last year, when they promoted a special edition of their product that featured, well, almost none of their actual product. It’s counter-intuitive – and impossible to look away from. (And it’s actually a kind of a tasty idea, no?) 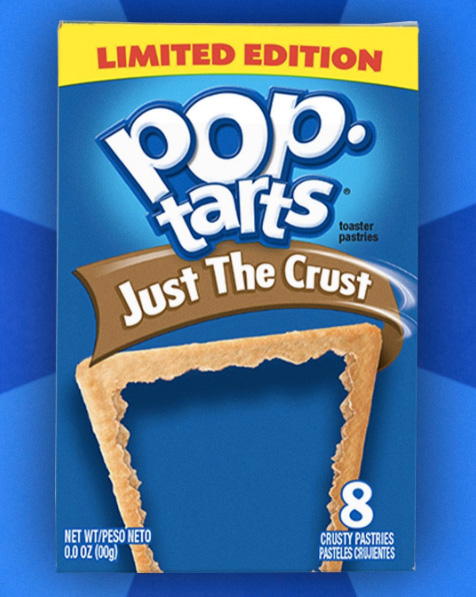 How weird can you get? See what happens (but it run it by the boss before hitting “send!”)