The forecasts were getting pretty dire. News channels were throwing out crazy words like “snowmageddon.” Businesses and whole cities were shutting down in anticipation of what was supposedly going to be a huge blizzard.

When Snow Storm Juno hit, Nickelodeon was ready. The morning of the storm (or light snowfall, depending on where you were), Nickelodeon sent out an email with a snow day activity pack for all the preschool parents who were going to be looking to do something with their kids once school got canceled.

By using contextual marketing in an email campaign, Nickelodeon’s marketing team ensured that the message around the email changed depending on the local forecast for every recipient.

But how? And how well did a contextual email message perform?

Since the company is in the TV industry, Nickelodeon doesn’t send transactional emails. Instead, every campaign is aimed to keep the brand top of mind. So rather than focusing on sales, Nickelodeon’s emails focus on creating great experiences.

That was the idea behind the activity pack. Nickelodeon’s marketing team had developed weather-themed coloring packs for their preschool audience in the fall and was just waiting to use them.

Snow Storm Juno was the perfect opportunity to deploy the “snow day” activity pack… especially to the areas that were being affected by the storm. So the team targeted the regions affected by the snow with a different message. 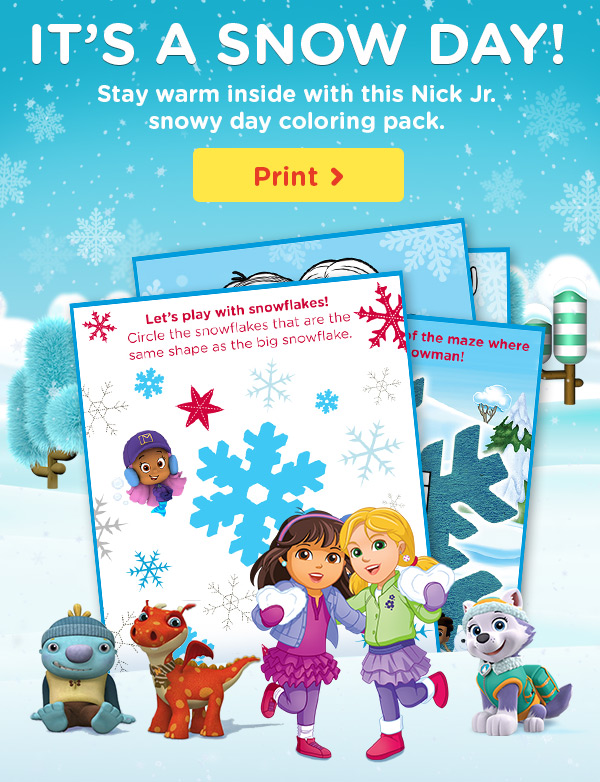 At first, Nickelodeon wanted to target subscribers with the snow day email by zip code. But the team realized that they didn’t have that kind of data for a lot of their subscribers.

So instead, Nick leveraged Movable Ink’s out-of-the-box weather-targeting technology to customize the content according to the weather outside when recipients opened the email.

If there was a 70% or greater chance of snow, subscribers saw the ‘It’s a Snow Day’ message. Working with the Movable Ink team, Nickelodeon built and launched the campaign in under 24 hours.

For the team, this was a dramatic proof of concept: contextually relevant content at the point of open is what drove higher engagement.

Real-Time Relevancy in a Content-Driven World

Email marketing isn’t the first channel people usually think of when it comes to innovation. People run campaigns and count the numbers. Recipients open emails, but there are very few moments when an email actually offers something new and exciting.

Nickelodeon is trying to change that by creating emails with real-time content that offer new and unexpected experiences within the inbox. The team calls this a “share-together” experience.

This is especially important for brands like Nick Jr. The core audience of the television shows is preschoolers, but the point of contact is the parent. With contextually relevant content like the Snow Day Activity Pack, Nickelodeon can help parents and their children come together and build a unique “share together” experience.

Movable Ink is helping with that mission. Since adopting Movable Ink for email marketing campaigns in 2013, Nickelodeon has experimented with countdown timers and integrated social media feeds.

Next, the team is planning to build more creative placements for personalization in email, inspired by the work other Movable Ink clients have done.

Instead of pushing out a marketing campaign with irrelevant content, the media company is working hard to provide content that enhances the customer experience in the moment instead of interrupting it.

An activity pack sent at the right time and the right moment might be something that kids and their parents finish in an afternoon, but the memory of that experience – and the brand that helped provide it – will live on.

Download our eBook, “Everything You Ever Wanted to Know About Contextual Marketing” to learn how contextual marketing can work to create new opportunities for companies and reinvent marketing as we know it: