Email and social media serve marketers in very different ways, but there are many similarities in how consumers interact with them.

The most effective email efforts are tightly bound to a sense of identity, community and that ongoing love story consumers have with a brand. The same can be said of social media platforms that drive interest by giving followers and fans the perception of an “insider’s view” into a brand. Sometimes it’s the feeling of getting a glimpse behind the scenes. Sometimes it’s a sense of exclusive “for you only” content. Other times, it’s simply the feeling of direct, conversational contact. Either way, it’s that perceived sense of personal connection that drives success in both social media and email.

Historically, it’s been difficult to merge efforts between the two approaches, but it’s becoming not only simpler to implement social media into email campaigns, but truly advantageous to brands to do it well.

So we know social media drives sales. Incorporating social into your email campaigns can help you leverage the power of social in two ways: Creating an engaged social community and letting your fans share their positive experiences.

For example, the mobile carrier Sprint wanted to generate some buzz by including their
Twitter feed in their emails. The feed was incorporated as an added section toward the bottom of their template. The Twitter feed served to bring in the latest activity among followers and illustrate just how active their fan base was. Subscribers received the primary message and call to action at the top section of the email and saw the live, latest Twitter activity toward the bottom. The result: a fairly incredible 400 percent increase in Twitter followers. 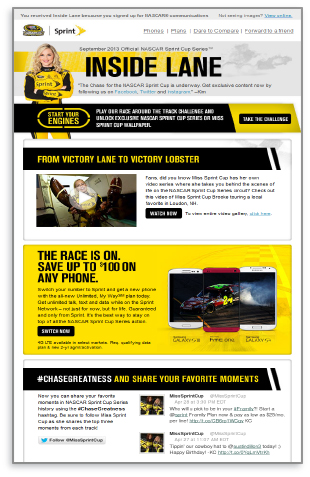 Now track that activity back to the number of sales converted as a result and you have an undeniably successful addition to your email program.

ESPN utilized a similar module in its email campaigns during the last NFL draft showing real-time draft picks and related social feeds in its emails during the event. The response was active and measurable. Once the draft was completed, they swapped the social media content out for something more timely so their subscribers only saw draft-related content when they opened draft-related emails. 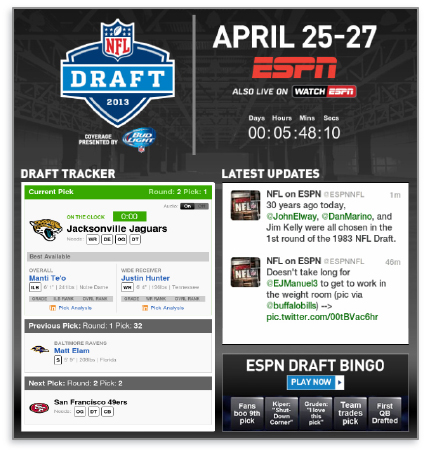 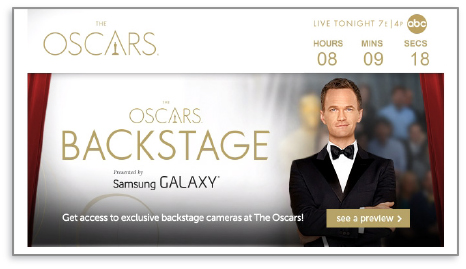 Successful email programs are so often driven by a sense of community, ongoing conversation and a sense of personal belonging among subscribers. These are just a few of the possibilities available to email marketers to leverage social media tools like Twitter, Instagram and others to exercise control of their own conversations, drive traffic and sales at the same time.