In our latest report, we took a look at the biggest consumer trends: how much people spent (and where), the customer journey, and the interactions between consumers and brand emails.

We studied email marketing efforts that were focused on the U.S. That got us wondering: How differently do our European friends interact with brand emails?

e-Village recently released their report, Email Benchmark 2018, based on 14,000 campaigns primarily in the Netherlands (with many campaigns going to international audiences). Their data was collected throughout 2017.

In our own report, we found that that mobile opens were strong across the board.

Overall, media, entertainment, and publishing saw the highest email opens on tablets, where consumers are more likely to read long-form content like ebooks and other media. The same is true for this industry’s high open rate on desktop: with many consumers subscribing to newsletters containing news articles and other content, it’s likely that this audience is opening these emails during their working hours on their desktop.

e-Village broke down some of these industries even more to get a close look at email opens. 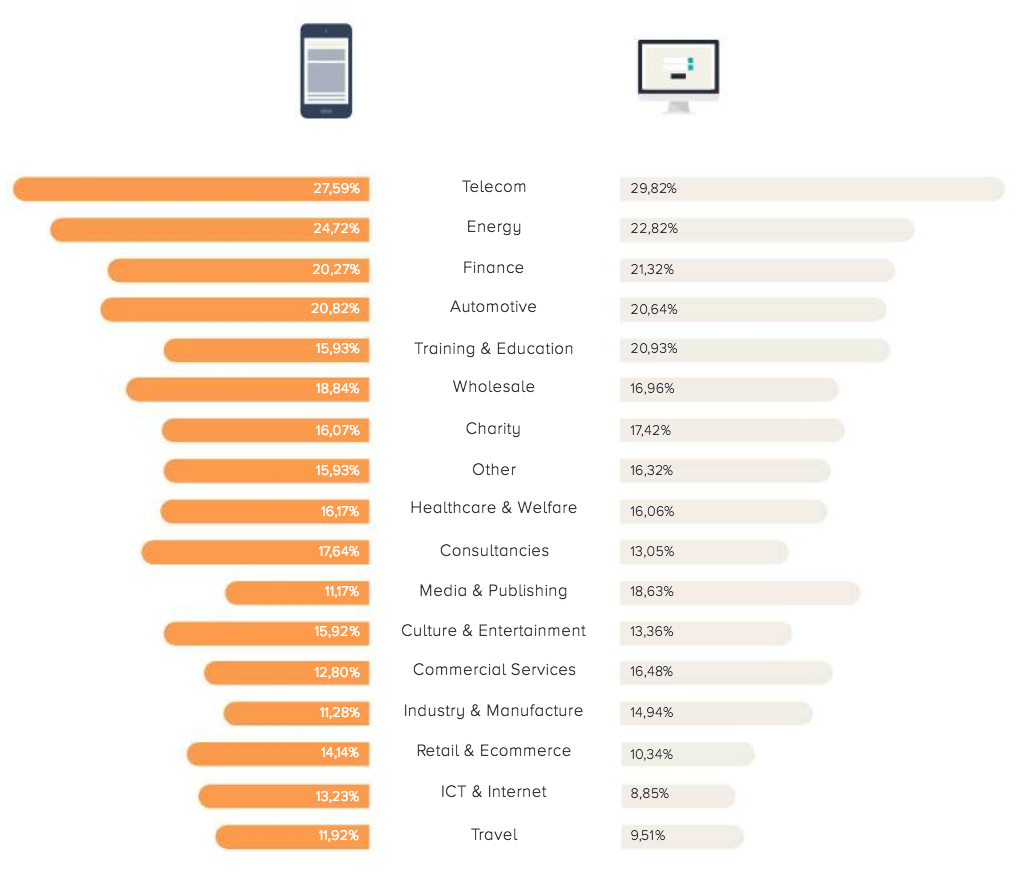 Similar to our own findings, they saw that Media and Publishing had more email opens on larger screens. But for the most part, there wasn’t a large difference between the open rates for mobile and desktop devices. Since we saw more consumers opening on mobile in the US, it’s possible that those mobile opens have yet to catch up to desktop.

Similar to what we saw in our own study, mobile open rates were generally higher than desktop opens. e-Village took it another step further and looked at open rates for B2B vs B2C.

Here are their findings for desktop…

And their results for mobile email opens.

In their study, e-Village reported that open rates among Europeans are about 8% higher on desktop than mobile. It makes sense that these business-related emails are being opened by people who are at work, and likely during business hours.

On the flip side, B2C emails (think retail and ecommerce brands) were more likely to be opened on mobile, where consumers are likely perusing their inboxes for the best deals. More than ever, this points to the need for brands to embrace email designs that are optimized for all screens.

Much of the email interactions we saw in the e-Village report aligned with our own studies on consumer interactions with email. The bottom line? Consumers in the US, Netherlands, and beyond are interacting with emails on multiple screens. They deserve the best experience possible, no matter how they choose to open their emails.

Of course, email opens are only the beginning. Download the full report, Email Benchmark 2018, to learn more about how international consumers are interacting with email via click-through rates, popular send days, and much more.