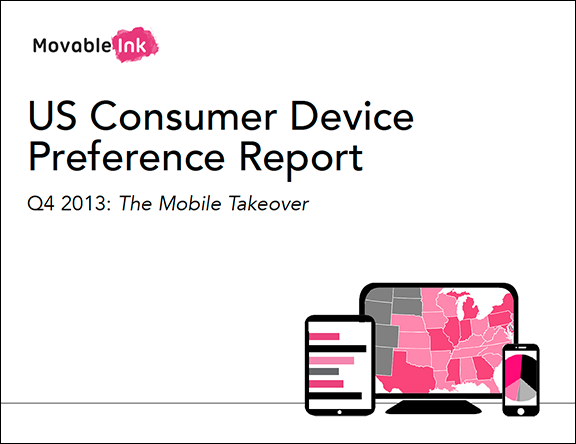 Americans are ditching desktops, viewing marketing emails on their smartphones and tablets more than ever, according to Movable Ink’s latest research, the US Consumer Device Preference Report: Q4 2013. The data reveals that 65% of marketing emails were opened on a smartphone or tablet in the fourth quarter, up four percentage points from the previous quarter, while desktop opens slowed to a new low of 35%, down from 39% in the previous quarter.

The report provides deep insight into the popularity of various devices, examines differences in consumer engagement based on the devices they use, and shows how device preferences vary across the nation. This quarter’s report also include an exclusive look at device usage over the course of the critical 2013 holiday shopping season. Unlike other studies, this data set exclusively includes results from large, enterprise B2C marketers.

“This quarter’s report shows that we are in the midst of a mobile takeover,” said Vivek Sharma, Co-Founder and Chief Executive Officer of Movable Ink. “In the new year, we expect marketers to continue to place high priority on mobile optimization which will allow them to better engage consumers who are on-the-go with relevant, real-time offers.”