Cyber Week 2016 was record-breaking, delivering some of the biggest online sales in history. Black Friday in particular saw a tremendous amount of growth over previous years. The biggest driver of that growth? You guessed it: email marketing.

Black Friday by the numbers

Jess Nelson, writing at Media Post’s Email Marketing Daily, reports that email marketing was one of the three top drivers of record Black Friday sales this year, according to data released by Adobe Digital Insights (ADI).

Black Friday 2016 also set a record for mobile sales. In fact, it was the “first day in retail history to drive more than one billion dollars in mobile revenue,” according to Nelson. Black Friday sales via mobile devices totaled $1.2 billion, an increase of 33 percent over 2015 totals, per the ADI study.

The survey results also point to the growing dominance of mobile. “More than half (55 percent) of all visits to retail Web sites on Black Friday occurred on a mobile device, according to ADI, with the vast majority of traffic derived from smartphones and 10 percent from tablets. Mobile accounted for 36% of all sales, with 11% derived from tablets,” Nelson writes.

Cyber Monday by the numbers

While Black Friday saw a ton of growth, Cyber Monday was not to be outdone: according to Adobe, it was the largest online sales day in history, resulting in $3.39 billion in online sales. That’s a 10.2% increase year-over-year.

“Cyber Monday is on track to be the biggest online shopping day ever, surpassing our forecast by almost $27 million or 0.8 percent,” said Tamara Gaffney, principal analyst, Adobe Digital Insights. “This indicates that consumers still had more appetite for online shopping despite the incredible volume of online sales on Black Friday. Prices are expected to start climbing after today as retailers shift attention to extend the season late into December with quick shipping deals and the option to click and collect in store.”

Competition in the inbox was fierce during Cyber Week 2016. Here are a few emails that caught our attention.

The San Francisco 49ers used an email with geo-targeting and a scratch-off functionality to promote in-store purchases to their Santa Clara and Union Square team stores. Customers could click to scratch off and receive either a $5 or $10 discount at their local team store.

Hotel Tonight used live and progressive polling to learn more about their customers. The poll helped keep their customers engaged, and the results will allow the company develop user profiles in the future.

Boxed used time-targeting to give their customers a heads up on 12 upcoming daily deals. Their availability would update in real-time by day of open, so customers would always see the active deals. 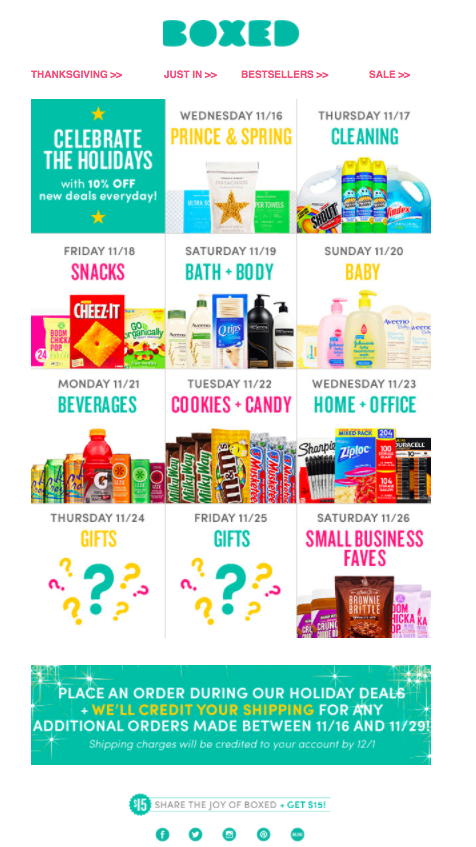 Email played a big role throughout Cyber Week 2016 and will continue to do so well into 2017. To learn more about developing contextual email campaigns to promote your latest sales, download our eBook, Everything You Need to Know About Contextual Marketing.