One way Comedy Central does this is through email. By working with real-time email marketing company Movable Ink, Comedy Central updates its email content dynamically based on its subscribers’ open times. For instance, if customers open a Colbert Report email in the afternoon before the show airs, Comedy Central can include a tune-in-tonight message with a preview link, Steele explains. But if they don’t open the email until the next day, Comedy Central can change its message to information about last night’s show and include a link to the full episode.

“Our engagement rates and open rates have gone up dramatically [as a result],” Steele says.* 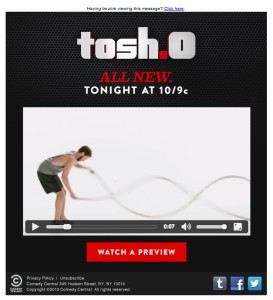 In this email promoting Comedy Central’s tosh.O show plays a video in the message to promote the new episode, and can change call’s to action after the episode airs.

Adjusting email content based on device is another way Comedy Central stays in step with its fans. If consumers open a Daily Show email on an iOS device and they have the Comedy Central app, they can click on the email and go straight to the app to watch a full episode, Levitt says. However, if fans haven’t downloaded the app, the network can include a link inviting them to do so. Comedy Central launched its app this past April and received more than one million downloads in less than six weeks.

“We’re being strategic in terms of what options we give you and how we make it easier for you to find  the content that you love,” Levitt says.

For more information, please feel free to reach out to us at contact@movableink.com.